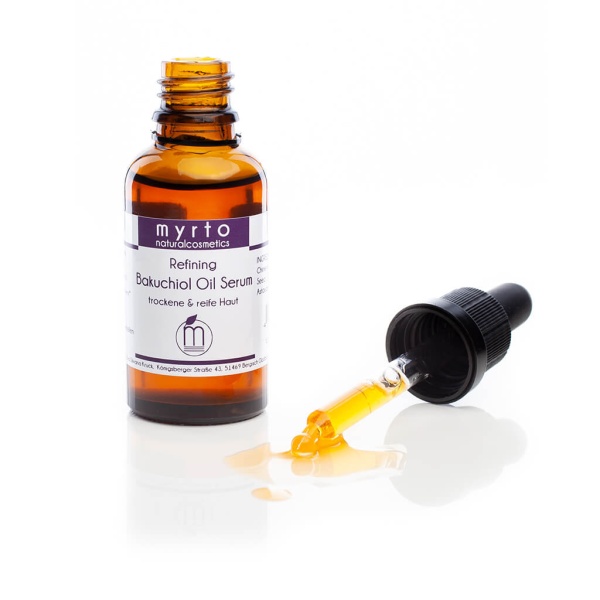 Bakuchiol has been considered a new "anti-aging miracle" and a trendy active ingredient against wrinkles for a number of years. Bakuchiol is a 100% natural active ingredient obtained from the seeds and leaves of the Babchi plant (Psoralea Corylifolia). In traditional Chinese medicine as well as in Ayurvedic medicine, the plant has long been used as a remedy for numerous skin problems, for example against sagging skin, dry eczema, pimples and acne, psoriasis, inflammation or even rough skin.

How does Bakuchiol work?

Why Bakuchiol instead of Retinol?

We have been asked again and again why we do not use retinol or vitamin A in our myrto products. Retinol, which belongs to the group of fat-soluble retinoids, is considered a particularly effective anti-aging agent. It contributes to the renewal of the top layer of skin (corneocytes). The accelerated cell renewal makes the skin smoother, and the appearance of impurities and acne also improves. Retinol also stimulates collagen production, making the skin more elastic. With its antioxidant properties, retinol also inhibits free radicals, which are responsible for accelerated skin aging.

However, the use of retinol in skin care involves considerable dangers. Cosmetics containing vitamin A should be avoided, especially in summer, because retinol makes the skin more sensitive to UV rays. If anything, it should only be used for night care. The easily possible overdose of vitamin A is also a problem. Too much vitamin A can cause skin reddening, dry and rough skin. People with sensitive skin are more likely to be allergic to retinol. A prolonged overdose of retinol can lead to liver disorders and accelerated bone resorption. Retinol is considered to be potentially teratogenic during pregnancy. Fertility disorders were found in animal experiments.

From a chemical point of view, retinol and bakuchiol are two very different active ingredients with completely different molecular structures. In cosmetic use, however, the 100% vegetable bakuchiol is a potential replacement for the synthetically produced retinol - without its unpleasant side effects. Studies prove the good skin tolerance of Bakuchiol. Accordingly, the use of skin care with Bakuchiol is also possible during pregnancy and breastfeeding without hesitation. Unlike retinol, Bakuchiol can also be applied to the skin during the day and in sunshine.

The Refining Bakuchiol Serum is formulated without retinol and instead contains 1% Bakuchiol - for an effective anti-aging with the lowest possible risk of side effects. The Oil Serum also contains other valuable natural ingredients: Olive squalane as part of the skin's own hydro-lipid film is easily and deeply absorbed into the skin without leaving the skin feeling greasy. Healing jojoba oil strengthens the connective tissue and improves the skin's elasticity. Grapeseed oil with its "sliding rail effect" has the ability to infiltrate the regenerating active ingredients deep into the epidermis. Finally, as one of the most powerful antioxidants known, astaxanthin neutralizes cell damage caused by free radicals.